These are easily a favorite around here. They are not good for you, but yum. I always make way more than we need and they’re always gone, so if you’re looking for a new way to do potatoes this St. Patrick’s day, you won’t be disappointed with these.

Turn your oven up to 400. Wash the potatoes and use a fork to poke holes in each one several times. Place them directly on your oven rack and bake them until they’re soft – about an hour. Remove the hot potatoes from the oven with an oven mit and allow them to cool on a rack or cutting board until they are cool enough to hold with your bare hands.

Cut each potato in half lengthwise, and scoop the flesh being careful not to rip the skins. Put the potato flesh into a large standing mixer bowl. Set aside half of the cheese and half of the bacon bits, then mix everything else with the potatoes, taste it and add salt & pepper. Don’t let the idea of mashed potatoes get into your head – the mixture should be very thick or it will all melt out of the potato skins when you bake again.

Scoop the potato mixture back into the empty skins and arrange them in a baking dish or cookie tray. Return the potatoes to the oven just until the filling starts to brown, about 15 minutes. Take them out again and put the rest of the bacon bits and then the cheese on top. Return them to the oven and bake them until the cheese is melty and slightly browning. 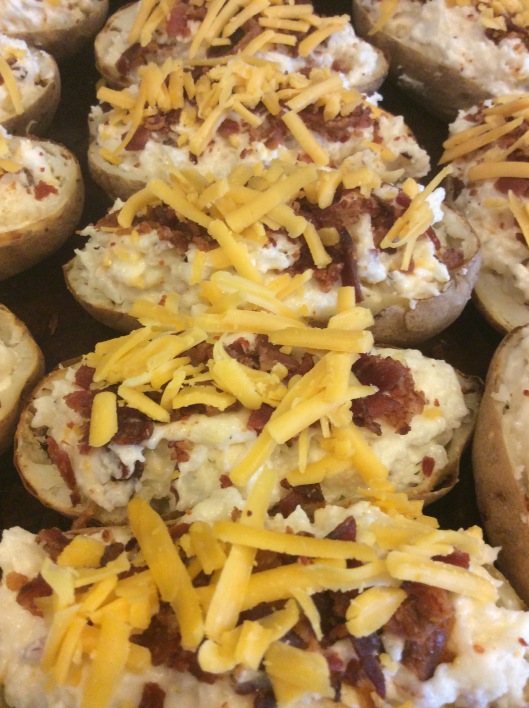 A couple of notes: I hate pre-shredded cheese. It’s covered in starch to keep it from sticking together in the package and it changes the texture of everything. If you’re rather buy shredded cheese, whatever, no big deal. Also, these can be made a day or two ahead of time and refrigerated, you just have to bake a little longer to bring them up to temp. Also, also, I like to wrap them individually and freeze them for an easy side on another day.