The birds are getting big. There is one Rhode Island Red who still needs a name that is particularly interested in me. Each morning she reminds me that they are big enough to get out if they try really hard. I change the water, fill up the feeder, climb in the box and give them a treat, then sit next to the brooder with my cup of coffee to observe them for a while. She hops atop the feeder and takes a literal flying leap to perch on the edge of the box beside me. So far she’s happy just to survey the lay of the land in this manner, but I’m taking the hint. They now go through a full trough of food and almost a gallon of water each day with no difficulty whatsoever. The dominant rooster is noticeably larger than the rest, and with the exception of one runtish Cuckoo, they’re approaching the size of softballs. In short, they need to get out of the house.

My friend Rebecca helped me put up a simple run right behind the house – very centrally located so they’re easy to keep an eye on. I then proceeded to corner 27 chickens, one at a time, and transport them by Rubbermaid tote to their outdoor space. This is hilarious! “Hurding cats” is the description. They were utterly mystified at first. Grass. You both step on it and eat it. If you’re a chicken you can step on it, poop on it and then still eat it. Awesome! 15 minutes later, they’re fighting over the only dead leaf on the ground, and rolling in the dust, happy as pigs in you-know-what. I will let them out for a few hours a day for the next week or so, then they can move into their coop. 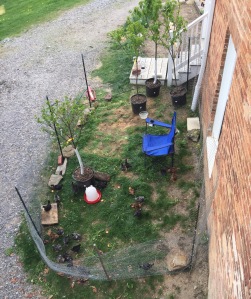 The bees. So I know I set up for this big dramatic story of removing the hive from my barn wall, and swarming bees, in only a tiny room, and prying back the walls etc., etc… so believe me, no one is more disappointed than I am in the completely anti-climactic absconding of the bees from their hive the day before we went to remove them. It was equal parts amazement and depression, when we pulled back the walls of the hive to discover that they were all gone! They left behind a section of comb a foot high, 6 feet wide, and 6 inches deep, but no bees. Le sigh. 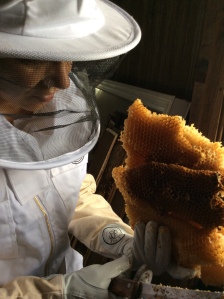 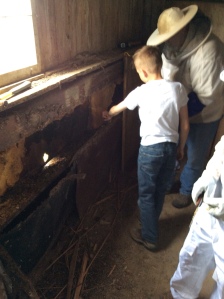 I took the comb out and drained the honey, then rendered the beeswax. Ugh. So. I went to the bathroom, and in the 2 minutes I was gone the beeswax boiled over. Let me tell you, this was a kitchen fail of epic proportions…epic…rivaled only by the time the lid flew off my blender full of hot Sicilian fish soup. I can be amused now that it’s clean, and I have honey and beeswax to show for it.

Well, I have everything I need except the bees, I’m not giving up now! Vern, my new beekeeper friend, quickly called the place he orders from and snagged me a couple of spare nucs. So once again (like the chicken coop), this was supposed to be my own free bees, but it now cost money. Deep breaths. In this department, for all of my best laid plans, things are happening to me rather than by me. Just go with it Stacie.

In the gardening department, the so-called tomato patch (which is going to fall short of my dreams this year and actually be the everything patch) has been turned over. I ordered a compost mix and managed to spread all 5 yards of dirt by myself in a few hours. My arms were unhappy the next day. A big shout-out to Ariane for her help getting the hot pepper patch expansion onto the herb garden. Looking forward to some hot sauce & pickles!

And lastly, in the department of random and unplanned stuff, a couple of very tiny kittens fell out of the barn roof. They can live with the chickens.

A big “THANK YOU” to the great people who helped me out this week!

Next week: the bees move in to their hives, plants that have survived the wind storms get planted, and kittens learn to eat solid food.