Last week I went to the Ox & Stone for a birthday dinner with some girlfriends.  Previously the Rio Bamba and then the Bamba Bistro, I was a little disappointed to lose the Bamba at first.  But I love tapas and I hoped to become equally attached to this new edition restaurant – we were not disappointed.  It was a Saturday night, we had made a reservation and were seated right away.  There are only a few obvious changes to the decor, the lighting is nice, and the atmosphere is generally pleasant.

We ordered drinks first – wine and beer all around and a craft cocktail to taste.  We chose what we thought was the most bad-ass one on the menu:  the Spanish Harlem.  Let me preface this by saying that these lovely ladies enjoy whiskey of all kinds and generally drink it neat, so the issue here is not toughness.  We thought – r

ye, mezcal, vermouth, lemon – awesome, what could possibly go wrong?  Unfortunately only 2 of 5 liked it enough to have more than one sip and 0 of 5 would order this again.  The words “cleaner,” “gasoline,” and “bacon” were used.  I was happy with my malbec, but there are plenty of other options.

On to the food, which we ordered a lot of.  We started with the warm spiced olives, sizzling shrimp and chef’s board.  Yum, yum and yum.  The interesting choice of cilantro on warm olives turns out to be brilliant.  Each bite tasted fresh and pleasantly surprising.  The shrimp was cooked perfectly.  It was tender, not overdone or chewy at all, and despite being basically an olive oil confit, did not seem greasy (in fact I kept dipping my bread in the shrimp flavored oil).  I forgot to ask what kind of olive oil they used.  The chef’s board was beautifully arranged and included a lovely variety of cured meats, cheeses and vegetables with toasted bread.  And finally – the Spanish poutine?  Yes, I couldn’t resist trying.  A hearty mix of potatoes, chorizo and queso fresco served in a mini cast iron skillet, I wanted to crack and egg over it and call it breakfast.  It was yummy, but I wouldn’t call it poutine. 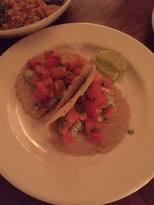 Round 2 included the fish tacos, which were underwhelming.  The “Rio Gulf Sauce” was very nice, but was also the strongest flavor on the dish. The hand made tortillas had a nice texture, but left a strange, sort of processed aftertaste.  The Mole on the other hand, was delicious.  The chicken still had its own flavor even though it was swimming in dark, rich, molasses flavored sauce.

Our suspender-wearing server was knowledgeable, polite, prompt and sufficiently indulgent of 5 women more interested in talking that focusing on the menu.  All of the food plus 6 drinks ended up costing us each a little under $38 plus tip, which I thought was very reasonable for the experience we had.  I will not order another Spanish Harlem, but I will go back.